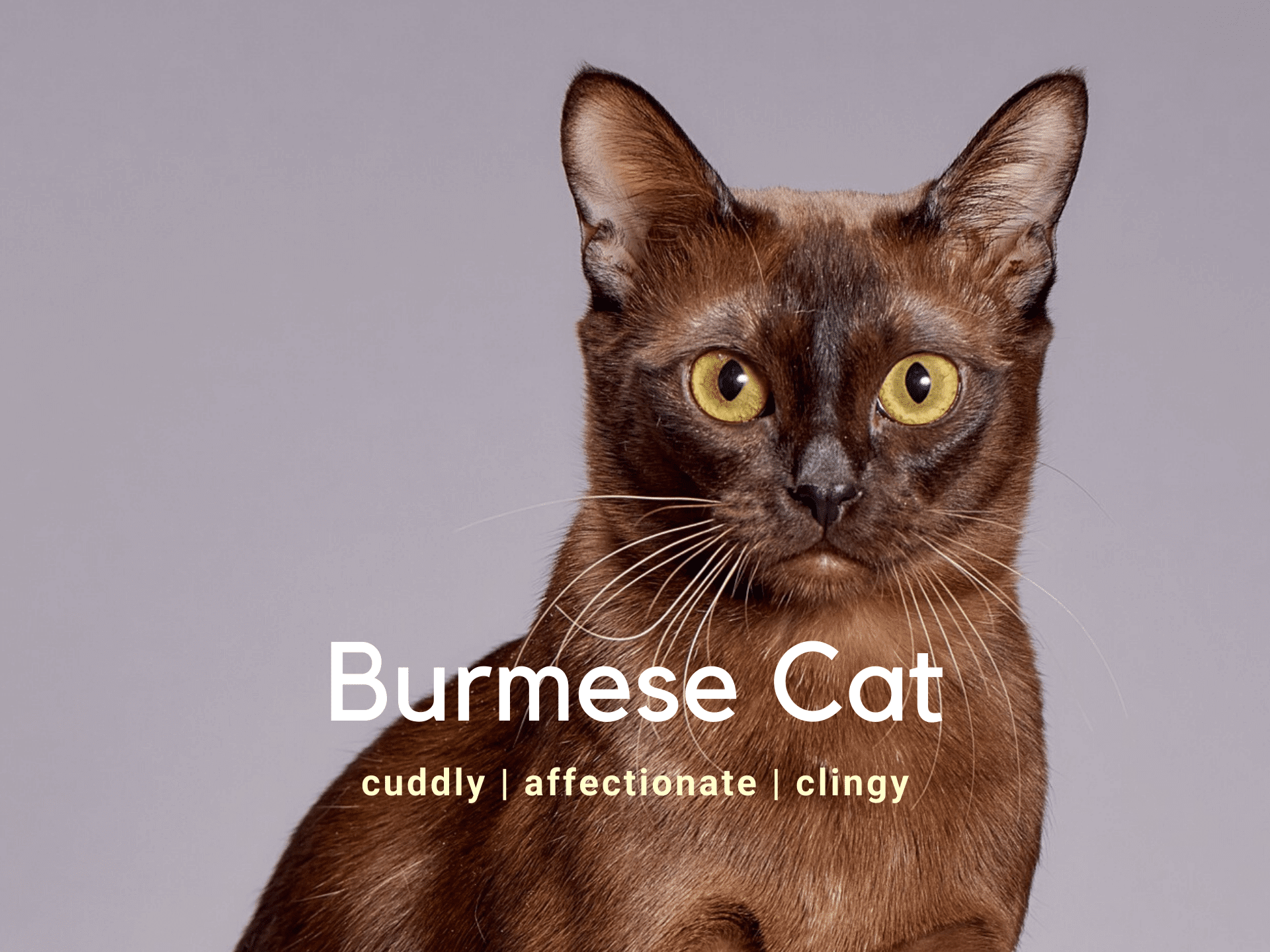 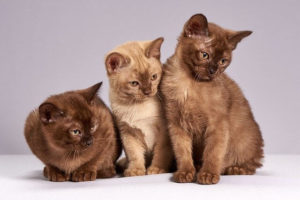 The Burmese cat breed is closely related to the Siamese and became a foundation cat for several new breeds, like Bombay, Tonkinese and Burmilla.

Burmese cats are affectionate, cuddly and intelligent. They love people and will follow their owners everywhere.

Burmese can develop almost a dog-like relationship with a human they love.

The Burmese are intelligent, social and highly affectionate cats. They love human contact, are very cuddly and mellow. They can develop strong bonds with people and get strongly attached to them, almost like dogs.

Burmese cats can be a bit clingy and they demand a lot of love and attention from their humans too. If you are a professional, who spends most of the time at work, you would need to get a second cat for Burmese to keep them company. Burmese cats if devoid of the company will get depressed and will suffer mentally.

The Burmese cat will be perfect for someone who wants to get a lot of love and attention from a cat and doesn’t mind giving it back to the cat.

Burmese cats like to express themselves vocally and can be pretty loud (inheritance after Siamese). 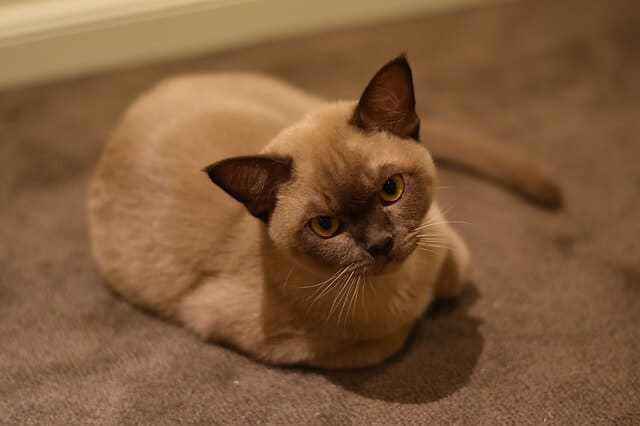 Burmese cats have a muscular, compact and athletic body with a medium, wedge-shaped head with a fairly short nose and medium-sized ears set well apart and slightly rounded at the tips.

Although they can be smaller than other cats, they tend to be heavier because of their muscularity. The legs are long and slim. The medium-length tail is straight, tapering only very close to the rounded tip.

The coat is short and silky with a satin finish. Because of their muscles and silky coat, they are sometimes referred to as ‘bricks wrapped in silk’.

Coat: glossy, short and with a satin finish 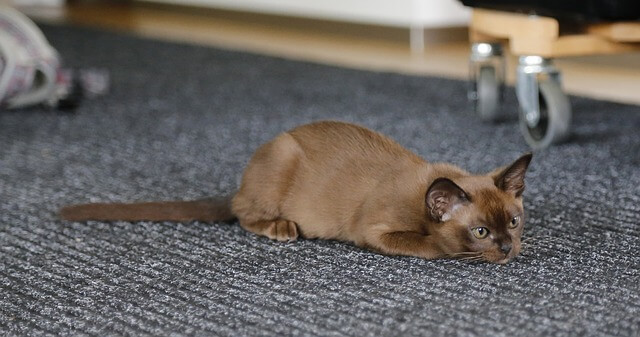 Burmese cat breed originated in Burma (now Myanmar) in the 15th century. The modern breed was founded by a female cat called Wong Mau, a cat imported into the USA from Burma in 1930, which was crossed with a Siamese tom.

The Burmese are low maintenance. As usual with shorthair cats, they are easy to groom. Their hair is very fine, need a brush only once a week.

The Burmese usually live a long life. They are generally healthy, but can have a few dental concerns. They inherited gingivitis (gum disease) from the Siamese. 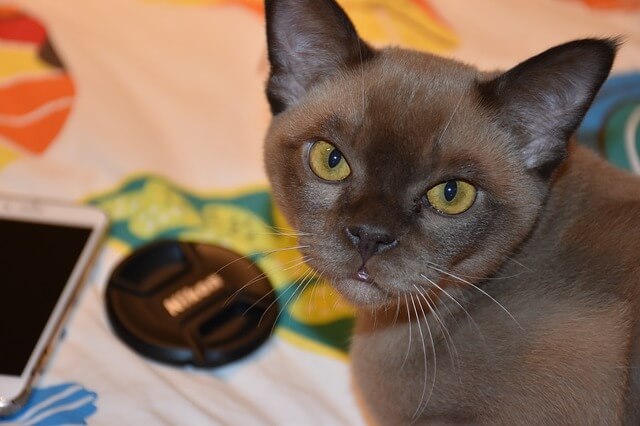 If you are in love with these wild-looking, elegant cats, or you know someone who is, here is a list of books and gadgets with a Burmese cat theme:

Sources used in this article:

You may also be interested in the following articles:

About Best Of My Cat

At Best Of My Cat we provide knowledge about cat care and in-depth reviews about cat products. Read more about us and our privacy policy. If you would like to ask us something or let us know how we are doing, please contact us.

We get our knowledge about cats from the following expert cat books:

How many cats are there estimated to be in the world?

It’s thought there is around 200 million cats in the world. The greatest number of cats is in the USA – 25% of a total cat population! Ratio of cats to people is 1:4, which means every fourth person in the US has a cat.

Amazon and the Amazon logo are trademarks of Amazon.com, Inc, or its affiliates.

This website is for information purpose only. We are not veterinary professionals and we suggest that you always consult one before treating your cat or another pet.

We use cookies to personalise content and ads, to provide social media features and to analyse our traffic. We also share information about your use of our site with our social media, advertising and analytics partners.Accept Reject Read More

This website uses cookies to improve your experience while you navigate through the website. Out of these, the cookies that are categorized as necessary are stored on your browser as they are essential for the working of basic functionalities of the website. We also use third-party cookies that help us analyze and understand how you use this website. These cookies will be stored in your browser only with your consent. You also have the option to opt-out of these cookies. But opting out of some of these cookies may affect your browsing experience.
Necessary Always Enabled
Necessary cookies are absolutely essential for the website to function properly. This category only includes cookies that ensures basic functionalities and security features of the website. These cookies do not store any personal information.
Non-necessary
Any cookies that may not be particularly necessary for the website to function and is used specifically to collect user personal data via analytics, ads, other embedded contents are termed as non-necessary cookies. It is mandatory to procure user consent prior to running these cookies on your website.
SAVE & ACCEPT